Actor, writer, director Catherine Eaton, a new powerful emerging voice in cinema, will be in Tucson with her highly acclaimed film, The Sounding. We are excited to have Catherine share her insight into the art of language, and raising important issues about how we perceive the world. 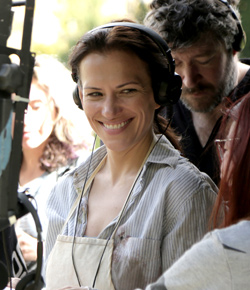 AIFF - How was blank verse cinematic to you when you first visualized the film and how it translated into the films imagery during production?

That said, I think there is a similarity in the rhythm an edit lends a film and the rhythm verse lends language. The same is true of music and film – music has a rhythm that influences the cut of a film (and our emotional response to it). And there is certainly a relationship between music and verse, so it seems to me verse and film have the ability to yield a similar potential symbiosis.

Also, there is a creative opportunity available: poetry tends to prioritize sound and image (vs. literal meaning), and the same could be argued about film (and sound/image vs. plot).

As to the second half of your question, it was my intention that the film's verse not translate into the film's imagery (doing essentially the same job), but rather, that they would at times compliment and at times contrast each other while striking separate notes.

AIFF - In your performance of the poetry from each play, as an actor, how did you approach a role this complex and make the language flow so seamlessly with co-actors speaking back to you in prose?

Catherine - In his own plays, Shakespeare's poetry all stems from each character's need to communicate or “get” something from another character. The poetry of each line – the rhythm and sound – are always in service of that communication (An example of this is Juliet's speech “Take him and cut him out in little stars” – the imagery and her breathless impatience is contained in the sounds of the words, as well as the meaning).

In the case of THE SOUNDING, even though Liv is using Shakespeare's words outside of the context of his plays, their primary purpose is still the same: to communicate, to get what she wants. And so as long as I (in playing Liv) used those words – both their meaning and their sound – to really say something to the other characters and try to get something from them, then there wasn't really any difference between how they spoke and how I was speaking.

AIFF - In pre-production with your amazing cinematographer, and art department, what did you discuss regarding the color palette of the film to complement or contrast your character, and co-stars performances?

Catherine - My production designer Rocio Gimenez is a genuine artist, so we had long in-depth conversations about the themes of THE SOUNDING and Liv's connection to the island. I had lots of images and clips I had pulled as references that I shared with Rocio. From that, Rocio went away and created her own mood boards to reflect her interpretation of all of that, and the result was the draining of color as Liv moves from the natural wild raw beauty and power of the island to the man-made arena of the psychiatric hospital. We knew we would begin with the greens and blue-grays found on these islands off the coast of Maine and have that inform everything – and then Rocio had the wonderful idea of imbuing the interior of the home Liv shares with her grandfather Lionel with deep burgundy reds as it is their emotional center and where the catalyzing event of the film takes place. So the palette begins rich, gets richer, and then – snap – when we hit that catalyzing incident, from that point forward color is drained from palette of the film to the point where the final fifteen minutes of the film takes place almost exclusively in a white room.

THE SOUNDING's incredibly talented DP David Kruta and I chose a camera and lenses (Alexa and Leica) that would allow us to really enhance those natural colors but achieve a clinical sharpness on the other end of the film, and he further emphasized that color-concept with lighting – working from source-sensitive, reverse-key lighting and natural light and progressing through to brighter harsher exposed aggressive lighting.

Finally, Caitlin Conci, our fantastic costume designer, reflected all that in the color palette and textures of the clothing of the characters. For instance, Liv is always in natural colors – even in the hospital – supporting the essence of the character regardless of environment, and Michael progresses from contained layers to loser fibers and rustic patterns as he loses the careful constructs he brought with him to the island.

AIFF - I believe your film asks a lot of important questions. Do we really need answers or is starting a conversation about the freedom to be who you want to be enough?

I'm so glad to hear you say the film raises a lot of important questions, thank you. As a filmmaker, one of my goals is to raise questions rather than answer them, and to present new ways of looking – be it at an issue, at a person, at a culture - that we may not yet have experienced. When we live with certain norms (as a society or as an individual), it can become difficult to see outside of the box we are presented with. I'm very interested in what's outside that box.

As far as the specific concept of having the freedom to be who you want to be (and of equal importance, allowing others to be who they want to be), I don't think questions are enough, no. But questions are a point of entrance for change.

AIFF - Why did you choose Pyramus and Thisbe for the play within the film? Does it have special meaning to you personally?

Catherine - I chose it because it's funny and brief and entertaining and the players are always the subject of affection and mockery (which was valuable at this point for Michael's character within the film) - but most importantly I chose it because it allowed me to stage a twist at the end of that scene (no spoilers!) that we've never seen before which served the film and the play within the film. To see a new twist on staging of ANY of Shakespeare's work that has never been seen before is a rare opportunity!