Toby Poser, John Adams, Zelda (Z) Adams, and LuLu Adams are the Adams Family, a film production unit that makes awesome films as a family. The Arizona International Film Festival is proud to discuss their newest film Halfway to Zen. 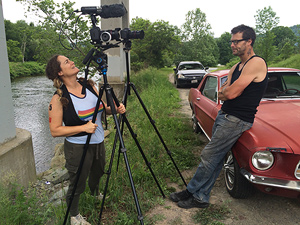 AIFF - Zelda, your character is complex and your performance is powerful. How did you approach your character Eddie? How do you prepare before shooting, does the director require endless rehearsals?

Zelda - I like to think of my character Eddie as a strong kid that has a lot of hard things going on around him like his father coming back and his mom's stroke including his change from Edie to Eddie. To be honest, since I luckily work with my family (and they are the directors) I don't have to rehearse like at all. Maybe not even recognize lines! So I probably before the shoot just take a nap or so and then put on my acting face.

AIFF - You shot some scenes in the film as well, do you enjoy taking on other roles besides acting?

Zelda - Yes! I love being both in front of the camera and behind. Ever since I was six I got to do everything in the film since I have awesome parents so yes I am quite lucky to be able to shoot movies with them. I also love taking photos and drawing.

And I play soccer and drums. My dad and I have a band, Kid Kalifornia.

AIFF - Toby, you're taking on quite a lot by acting, writing, producing, directing god knows what else taking care of the family and seeing one child off to college. How do you balance these roles and still be able to settle down as an actor while dealing with so much?

Toby - I remember on our first film, this was the toughest challenge. Before then I'd only identified as an actor-- (Oh man, I can hear John making fun of me now, saying in a very serious, dramatic tone, "ActING!"). Yeah, so suddenly remembering lines and getting into character were dwarfed by things like "Do we have a permit for this? I like the dialogue; why are we improvising? The dialogue stinks; let's improvise!" And then on top of that I was always thinking of the kids. They were 6 and 11, and we were shooting in the desert, on mountain tops, and in secluded incredible locations around the country. So instead of my "ActING!" I was more worried about their being hungry.... or not getting eaten by an alligator or bitten by a cottonmouth shooting in FL or falling off a cliff in Utah. So much for Mom of the Year.

But now, after four films, we've learned how to juggle well, the kids are older, and I feel lucky I can wear all these hats and be around them at the same time. Or I should say be working alongside our kids, because they are equally involved with the process.

AIFF - Does your character understand Pop in ways no one else can see? Your performance is awesome.

Toby - (I love this question, and thanks for the kind words.). Yes, I think Pop and Vick have something in common because of their respective brain issues-- very different issues, but they both feel trapped, imprisoned by their limitations. While Pop is sadly only going to go deeper into his dementia, Vick has the chance to recover from her stroke.

This theme of imprisonment was very important to me and helped guide my writing. Nick and Eddie fit in here too because Eddie feels trapped by his birth gender-- he is a boy in his heart, as he says. And then Nick really was incarcerated. Of course the other side of prison is freedom, and I like to think that all 4 characters find their particular freedom (or peace) by the film's end.

AIFF - How did you prepare to play Vick? What themes about her character interested you while writing the script?

Toby - I watched a lot of videos and talked with women my age who'd recovered from strokes. I'm grateful for their stories-- they really helped me get to know who Vick is. My friend shared something that really cracked open the role for me: that Vick might actually like something about the escapism her stroke allows. She can use it as an excuse to disengage from the world, from her emotional pain, even from her responsibilities as a mother.... To act like a big brat if she chooses to. It doesn't put her in the best light, and I like finding those small unappealing complexities in characters. It also helps illuminate the fact that 11 year old Eddie, who's got his own issues to navigate, really is the most courageous and confident of the bunch. And then physically, I practiced in the mirror and borrowed something from Brando: I shoved a tiny piece of cotton in my left lower gum to remind myself not to move that side of my face.

AIFF – John, as half the writing team on this film, how many hours a day do you write? (I hope I haven't asked this before) Do you write together or do you take turns writing scenes, how does that work? Do you ever get writers block, and if so how do you fight it?

John - On Halfway to Zen we had a fun writing system. I wrote the first draft in a couple months. (I can only write for about an hour at a time because I can't sit still very long). Toby worked it over and filled in more details. Then we walked a couple miles everyday together and talked through the scenes and worked together on finding all the lines and circles we wanted completed. We call our hiking trails "the office". Halfway to Zen is the first of our films that we really wanted a locked down script and it really helped the filming and ultimately the editing go much easier.

AIFF - Adams Family – what was a difficult scene to shoot either technical or performance wise?

John - Technically shooting in the restaurant was the hardest thing because there was a lot of noise and dialogue to capture. You'd be amazed at how much a refrigerator hums and air conditioner rattles and cars outside honk.

The easiest and most fun was to shoot all the broken down train towns. Driving across country I followed train maps so I could construct a beautiful broken town through film. It was wonderful to take the time to explore these towns to find the buildings and sections of train tracks I found most romantic.

Toby - This wasn't as difficult as it was insane: we shot a few scenes of us swimming in the river, and those shoots always made me cringe: we literally just submerged the tripod into the water with the camera hovering a few inches above the surface. But that's why working with John is the best-- he's a bit of a lunatic who doesn't understand the concept of "NO, this can't be done." Without him, nothing would get done-- and you can count on it all getting done with flavor!

And then there's the kids, Zelda and Lulu (who's a freshman in college now). They've gotten really good behind the camera, and it's always fun to see what cool shots they've lined up. They are also our BS monitors (can I say bullshit on here?). Their unique perception is really important; helps us keep it real.

AIFF - Family - going into this project what were some of the issues you faced?

John - I think the toughest issue was to be vigilant not to be heavy handed with these subjects. When I had cancer, my nurse said to me the people who make it are the ones who can laugh. And that beautiful philosophy also applies to life. One of our main goals in this film is to show how we can and should laugh even in the darkness.

Toby - We have a very thin budget, no special lighting or equipment.... Just simplicity, determination, using what nature throws our way, and if we're lucky, a lot of happy accidents. In other words, rather than feeling limited by our limitations, we kind of run with them. There are a lot of generous people out there who offer their cafe or home to shoot in, their food, their time. Making films can be so heart-breaking and heart-filling on any given day, and it's always worth it.

AIFF - Family – the texture of the film is hard and unforgiving on the outside as predators lurk about. From your other films, I know you do not shy away from controversial themes. As a family of filmmakers, Zelda was brave to be in such a frightening and disturbing scene. Was there ever a question as to whether or not to put it in the film?

Zelda - hmmm. Yes, most audience members thought that scene was very scary and horrific, but luckily I was working with my drum teacher (the guy who played the molester dude) and he is such a sweetie and very kind. So it was no worries and he was very pro for instance he was the only actor who wanted to do a rehearsal!!!!

Toby - Oh yeah. I had a hard time with that scene. I think I even pushed to drop it, because it disturbed me so much. That actor, Nathaniel Meek, is a close friend so Z was very comfortable around him. (He's the sweetest guy, by the way, which makes his creep factor skyrocket in that role, and he did it so well.) I do think that scene helps drive home several important issues in the film: It gives us the chance to see Nick as both a hero and a criminal. It also highlights Eddie's courage and yet vulnerability; the fact that she is overwhelmed by her circumstances. And Nick hits the end of the road regarding Pop. He knows he's got to put Pop in a "home," which is really hard, but in a strange and kind of beautiful way it also pushes the rest of them together. This was a good example of when having a yin yang kind of partnership (where John and I balance each other out) was really helpful, because John really advocated for that scene and in the end I trusted his instincts. Sometimes it works the other way too, so after 4 films we work well together that way. And then sometimes we have to shoot things two ways and duke it out in the editing room!

John - I had a religion teacher in college who said true genuine love is being able to forgive anything. I don't know if that's true, but I see families that have gone through so much pain and yet they still stick together. Whether that's admirable or not, it's a pattern that's undeniable. Our characters take a chance on forgiveness.