Multi-talented artist and filmmaker Paul Gray will be in Tucson to exhibit his newest film And Violet, where he takes us into the complex world of adoption. Paul discusses performance and the challenge of telling this important story set in the cinematic world of Scotland. 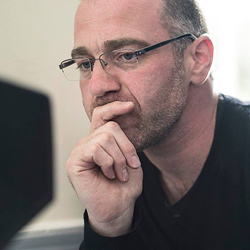 AIFF - The three main characters each fight for their lives. When you were writing the screenplay, what was the challenge of creating their worlds and what was the difficulty of writing and directing a film with three equally strong characters?

Paul - Telling a story from the perspective of three characters was an intention from the very beginning. The screenplay was developed with this narrative structure in mind, so creating a coherent story that engaged, and allowed for three separate points of view to be expressed, was certainly a challenge that I had to consider throughout the writing process. At the centre of the story is the emotive topic of open adoption - where there is on-going contact between a birth family and adoptive family – and we experience the complex relationship that adopted teenager Violet has with both her birth Mum and adoptive Mum. I wanted to give a balanced and non-judgemental insight into the lives of these three characters, so while we spend time individually with each character's story, the narrative is built around key moments when their lives cross and impact upon one another.

AIFF - Hana Mackenzie, as Violet, gives a very subtle and gripping performance. There is a lot going on underneath that wonderful head of hair. How did you work together to find the right tone of her character for a part that was difficult to portray?

Paul - I initially met Hana after Ian Dunn, who plays Violet's Dad, recommended her. Ian is a lecturer in acting at Edinburgh Napier University, and while Hana was in the process of completing her studies, he suggested that I really should meet her. From the first audition Hana immediately made the role her own. This all happened about six months before we started shooting, so we had a lot of time to discuss Violet's character and refine some of the detail.

We would discuss particular themes or scenarios from the story and Hana would improvise video diaries based on these discussions. The results were wonderfully raw and very natural, and some of the ideas from these rough recordings found their way into the final film - where we only really get an insight into what Violet is thinking when she shares her private thoughts directly to camera.

I had also been consulting with a local adoption agency, Scottish Adoption, who were hugely supportive during the development stages of the screenplay. They helped facilitate meetings with people whose lives are affected by adoption, including adoptive parents, birth parents and a group of adopted teenagers. Hana and I met with the teenager group and we screened some of the video diaries. The group was extremely open about their experiences and insightful in their discussions on Violet's character.

AIFF - The environment is stark and the colors are muted in many of the scenes. I do not find the film sad but rather uplifting. Is that a theme you want to resonate with the audience?

Paul - I am glad to hear that you found the story uplifting, and yes it is very much the theme I want to resonate with the audience. Adoptive parents and birth parents can sometimes be labeled in very simple binary terms – that of good parent versus bad parent - but it is not always so straightforward. Violet is caught between two conflicting parts of her identity, between nature and nurture as represented by Birth Mum Zoe and Adoptive Mum Cathy. Put simply I would say that part of the story of And Violet is Violet's pursuit to try and regain a sense of equilibrium.

As for the environment of And Violet, we shot the film in Edinburgh, which is a World Heritage Site, but I wanted to show a different type of beauty to the elegant sandstone structures that it is famous for. Like the relationships between the characters, areas of the city are in a continual state of development, so this is reflected in the characters' surroundings. I set Cathy and Zoe's homes in contrasting locations to reflect something of their differing circumstance - Cathy and Violet live in a solid modern and spacious apartment overlooking the sea. It is high above ground, safe and ordered, which is in stark contrast to Zoe's temporary home in a small and cramped urban canal-boat that floats on standing water.

AIFF - Birth Mum Zoe (played by Kirsty Strain) has been down a hard road and Adoptive Mum Cathy (played by Shonagh Price) battles to protect her adopted daughter at all costs. Can you talk about the dynamic between these two mothers?

Paul - Both characters are motivated to do what they think is in the best interest for Violet but they don't always get it right and their own needs sometimes affect their judgement. I think this is an important aspect to explore - that Zoe is seen as a fallible character trying to right previous wrongs, while Cathy is the capable mum who fears losing her daughter. Cathy believes that she has done the best she can in bringing up Violet to be a well rounded person, while also repairing some of the wrongs that Violet experienced while in Zoe's care. On the other hand Zoe accepts her failings, but she is also aggrieved in knowing that she never got the chance or the support that she desperately needed.

There is also an underlying mutual gratitude between Zoe and Cathy. Zoe knows that Cathy has given her daughter safety and security, and a life that she never would have been able to offer. While Cathy knows that her wonderful daughter shares something of Zoe's spirit, and ultimately wouldn't exist without Zoe having brought her in to the world in the first place. This dynamic adds further complexity to the relationship between the two Mums.

AIFF - The music in the film is great and used sparingly, which greatly added to the effectiveness of scenes, and I especially liked the live performance of Hook. Can you talk about how you decided to use music or not use it to accompany particular scenes in the film?

Paul - I use music sparingly at times, again to help contrast the worlds of Zoe and Cathy. When we are with Zoe, there is generally a lot of intrusive noise - the canal boat is right next to a building site - whereas Cathy's world is far quieter and more controlled.

The use of music in the film is generally diegetic and is either played by the characters or in the background of a scene. I didn't use a film score because I wanted to strip certain aspects of the film-making process back, as I felt this was in keeping with the type of story that is being told. I used music in scenes where the emotional connect between characters defines a turning point in the story. Like in the live performance of Hook in the club, where we see Zoe let go and act freely for the first time, but she is also reckless and this collides with her past and with Hook's world. These actions then go on to have consequences for her relationship with Violet.

Hook is Zoe's confidante and a very quiet character. We don't hear him say much, but when he does, he chooses his words carefully when advising Zoe. I liked the idea that this very quiet and thoughtful personality could also surprise, by performing live in the way that he does. All of the music in the film is by local acts and Dave (who plays Hook) is the emcee of Scottish hip-hop group Stanley Odd, who are a fantastic live act and it was great to have him bring that energy to the film.