Martine Blue, writer, director and producer and all around awesome filmmaker, is attending the festival with her debut feature film Hunting Pignut. She shares her insight on filming the real, little known world of Gutter Punk, dealing with tragedy and finding your way home. 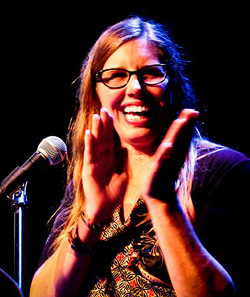 AIFF - Taylor Hickson as Story, and Joel Thomas Hynes, Pignut gave super strong performances, like all the actors in the film. How did you get Taylor and Joel up for such emotionally hard scenes in the squat, and how did the texture and set/artistic design of Xavier Georges affect your direction and their awesomeness on screen?

Martine - I felt I had to approach Taylor and Joel's real life relationship very delicately. There is an age gap between the two actors (Taylor was 17 when we shot the film), they had to do a couple of very challenging scenes together and Joel can come across as intense or intimidating at times. I wanted Taylor to feel as comfortable working with him as possible. It was very important to me that their first meeting gave them a fun memory together, one that both actors could use as a foundation for their character's relationship. I organized a hike around Signal Hill (a gorgeous and historical scenic lookout in St. John’s where we also shot a scene in the film) for the three of us. From there, we rehearsed the most difficult scenes and discussed personal experiences we've had that relate to the material and correlations they could build off to make the events in the scenes real to them. The PCP scene was especially challenging to Taylor who didn't have the life experience to build those specific reactions on. Taylor puts her heart and soul into preparing for her roles and was able to dig deep to find elements of her own life to make her character's experience real for her. Taylor and Joel, who are also both musicians, became great friends, which ignited their on-screen relationship.

We were super lucky that Xavier and his team were able to work on our film. They were working on a period series called Frontier which had a schedule set back just two weeks before our shoot. The art director we hired wasn't working out so Xavier and his incredible art department researched their heads off and pulled the world together in 2 weeks. I was simply blown away by their work. I lived at C Squat in NYC for 7 years and had pictures of the squat as well as an incredible coffee table book by photographer Ashley Thayer called "Kill City" (also a squatter at the time) for Xavier and the art department to study, so they could achieve the right mix of art and squalor that was C Squat and bring that aesthetic into the film's world. I feel that the authenticity both the art and the wardrobe departments pulled off enabled all the actors, many of whom are from St. John's and had never even really seen a gutter punk before, to sink into the world.

AIFF - Stéphanie Anne Weber Biron, your Cinematographer is incredible, in pre-production what were some of the elements of style you discussed for each world?

Martine - We really wanted a separate aesthetic for both worlds and for our protagonist Story's personal journey to be reflected in the camera work. We started with a muted palate for the rural or "around the bay" portion of the film and for bright, vibrant colors in the St. John's scenes, as her world, life and outlook starts to open up when she runs away to the city. We discussed crowded frames in the early scenes, which reflect her feeling of being trapped, which open up as her world opens up. We also built a strong motif of fishing gear and nautical elements for the rural scenes and we shot through crab pots, lobster cages, anchors, fish tubs and racks. I also sought out my favorite alleys and graffiti in St. John's to show a very different aspect of the city than the pristine, iconic and idyllic shots that are featured in award winning Newfoundland tourism ads. Stephanie and I jokingly called the "film fish things and graffiti" at one point when we saw how much of each dominated our rushes. I actually had the art department scale the graffiti in the squat down when I realized how much was in all the exterior scenes of the film. We also avoided classical coverage in favor of an approach that focused on our main character Story. Some minor characters are only shown from the back and are not covered at all, so we can stay with Story's reaction to how they are affecting her. We also wanted to go with one shot scenes "oners" wherever possible as a stylistic approach.

AIFF - I think to live gutter punk you need to be much stronger emotionally and physically than people would ever give you credit, and you captured that beautifully in the scene where Pignut tries to educate the pedestrian. Your thoughts about courage, (otherness, not necessarily gutter punks) and how that translates in the film?

Martine - The theme of the film is about finding one's clan and place in the world. Exploring a sub-culture that seems potentially hostile at first definitely takes a determined and strong personality. I guess part of the theme is that having the courage to embrace being a misfit and not bowing to the pressure to conform to societal standards can lead to finding a clan of folks who share your core values and beliefs.

AIFF - How hard is it to recreate being high on PCP visually and musically and have people who have never embarked, get a sense of it?

Martine - That was a real goal of mine is to play with the visual and musical treatment of the PCP scenes so that the audience feels like they are on the drug with the characters. To achieve this visually Stephanie shot those scenes through a beveled ashtray to achieve the double imaging, light flares and a surreal, and a slightly off focus quality. My friend Dani Bailey is the singer/songwriter who is Story's voice in music. She has 5 songs in the film. It was particularly challenging to get her to play a discordant version of her song "Close Proximity" for one of the PCP scenes. It meant that she had to play against everything she knows to be sound musically. Our composer Simon Miminis then took the discordant style Dani and I built and composed his own PCP music for the love scene. It was fun to work with artists and ask them to push themselves beyond what is tasteful and considered proper form.

AIFF - You experience any feedback from fellow gutter punks about how you portrayed your world? If so, what resonates or not with the community?

Martine - So far no one from my community has been able to see it yet since it has only screened in film fests across Canada and not in any cities where I knew any punks to invite. However an old friend of mine who used to squat at 5th street in NYC is coming to the AZ screening, so I'm looking forward to her feedback. So far my friends who have seen the trailer think it's a good representation of the world. I expect more feedback from that community as it starts to screen internationally now and especially when it goes on-line and becomes super accessible to everyone in the next few months.

AIFF - The film for me is about family and you made it clear that gutter punks look out for each other, perhaps more than where they came from. Was that a theme you felt strongly about conveying?

Martine - I'm so glad that's what you got from the film. My goal was to portray the gutter punk scene authentically, which means showing the alcoholism, drugs and violence, but I also wanted to make sure that I highlighted the aspects of the culture that I love and what drew me to it, which are the fun we had and the incredible sense of community and family it gave me. C Squat and my present home in Newfoundland were the two communities that I felt at truly at home in, where I felt I belonged and felt like family to me, so I wanted to reflect that and have these two divergent worlds come together. As an only child with a tiny extended family, finding a community to belong to was vital to my own happiness and sense of self worth, so it is a major theme for my life as well.

AIFF - The clothes really do mean something to Maggie, can you talk about that?

Martine - Maggie is growing out of the nomadic, spanging scene into studying tattoo art and wanting to buy a tattoo gun and start her own business. I wanted her to be cleaner than the other characters and for her wardrobe to reflect the transition from nomadic gutter punk to an artist interested in exploring the world and a change of focus.