AIFF is honored have long-time friend and accomplished filmmaker Liam O Mochain back in Tucson with his multi-dimensional film, Lost and Found. Liam shares his insight into filmmaking, and the great cast and crew he worked with on this wonderful film. 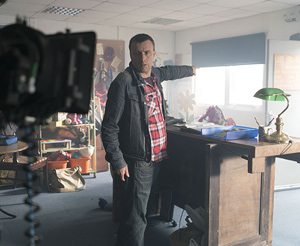 AIFF – Congratulations on the success of your film, this additionally marks a special occasion. You first came to Tucson 20 years ago with a film. Can you talk about some highlights and moments you have shared with us over the years? What’s special about Tucson that, fortunately, brings you back?

LIAM – I can't believe it is 20 years since my first visit to Tucson and the Arizona International Film Festival. The first year was very special as it was my first international festival to attend. A group of Irish filmmakers attended in 1998 and we really enjoyed it. The audiences, films, festival staff, other filmmakers and locals were great and still are. This is what keeps bringing me back!

AIFF – The film is an anthology. Why did you decide to tell the stories in this way?

LIAM – I am a big fan of anthology films such as the Paris J’taime, New York I Love series and portmanteau films like Robert Altman’s Short Cuts, Quentin Tarantino and Roger Avarys’ Pulp Fiction, the Mexican film, Amores Perros, the Cuban film, 7 Days in Havana which is set over seven days in Havana with one main character at the centre of each story. With these types of films, you get to dip in momentarily into an array of peoples’ lives. Like a fly on the wall. If you don’t like one of the stories, another will be along soon!

AIFF – More often than not on multi-threaded stories, there can be multiple directors. Was this ever a consideration?

LIAM – Not really on this one. I had a good idea of what I wanted from the overall film. I wanted to carry one main theme across the film of something ‘lost or found’. Whether it was an item, a person, be it mental, physical or geographical. I had made two feature films before Lost & Found. They were both straight forward enough narratives and were filmed all in one go. With this film, I wanted to make a series of stories like you would with short films. They had to work on their own but also together as one bigger film.

AIFF – This is your 3rd feature. Did your experience on your previous films make this one easier to make?

LIAM – You are always learning. Hopefully! Every film is a new experience and has its’ own set of unique challenges. There is no way around that. I made my first feature ‘The Book That Wrote Itself’ with not a huge amount or very little experience but with a lot enthusiasm. I thought I knew everything! With WC, the second feature film I made I gained a lot more experience but lost a bit of the initial enthusiasm. With Lost & Found, I tried to regain that starting out enthusiasm while making as professional a film as possible. What I learnt from the first two films was too spend more time on the scripts and allow as much time as possible for prep. The more time spent on prep the better, particularly if your filming schedule is tight and the schedule is always tight! What also helped, which I did on my 2nd feature film WC was to set each of the stories in Lost & Found in one prime location. We did have a lot of sub-locations in and around the main location to viewer engaged but not having to move constantly was a great help. All in all it was a pleasure to make Lost & Found. It’s not every film you can say that about.

AIFF – What was the most difficult thing about making the film?

LIAM – Time and money is always a problem. No matter the budget. I worried if the main characters were going to work across the different stories. Also, the stories themselves, would they gel together in the finished film. I had a feeling that the individual stories could work but what about when you put them all together in the edit? Would it work as one picture? I think they have, but I am always going to be subjective. From the production point of view, the hardest thing was not knowing if the whole film would come together. Doing it over five years was a gamble. Would the actors and crew come back year after year? Would the actors look the same!

AIFF – Talk about your cast and crew? How did you find them?

LIAM – I got to work with a lot of great people on the film. A lot of the cast and crew I worked with on previous films, others were either recommended to me or I had heard off and I wanted to work with. Once I decided to make the film and shoot the first segment, one of my main jobs was to try keep everybody on board for the subsequent pieces and years. Thankfully the core cast and crew came back time and again. All the cast and crew work constantly on bigger productions so the wealth of experience available to me and the film was great.

AIFF – What are your hopes for the film?

LIAM – Hopefully, it will get good play at film festivals and then get released everywhere in all known and available formats! The distribution arena has changed so much over the past 5 years, never mind over the past 20 years, that you never know how or where you will see a film or content as everything is called now!

AIFF – Any chance you will come to Arizona to make a film?

LIAM – Yeah absolutely. I just need someone to find the money to make it happen!