AIFF is proud to have awesome local Tucson filmmaker, Nickolas Duarte, show his powerful film Jay, about a wonderful artist and person who imbues the essence of inspiration and courage. 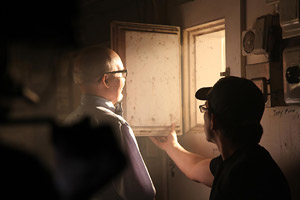 AIFF – What inspired you to make this film? Jay is brave in the face of so much adversity.

Nickolas – Initially, the inspiration was Jay’s artwork and his approach to it. I thought he had such a unique perspective on his craft and I wanted to try and capture that. We were already in the making of the doc when I learned of his entire story. His history felt like a literal hero’s journey that I couldn’t not tell it.

AIFF – Was it a difficult decision to talk about the abuse Jay suffered as a child and use it in the film?

Nickolas – It was difficult. As it should be, whenever you speak with someone who is brave enough to disclose something so traumatic. His willingness to be open and to share though made us more comfortable to tell that aspect of his story. In terms of the creation of the film, the challenge was choosing what specific stories to use, and how to use those stories without being exploitative. We never wanted to be gratuitous but we also wanted to be honest to his telling of it. It can become a difficult thing to editorialize and walk that fine line.

AIFF – What did you learn from this film that surprised you?

Nickolas – Pretty much everything! The making of this film was so unlike any other project I’ve directed. Obviously, Jay’s telling of his story was surprise after surprise. In terms of the craft, I had some early struggles with it but talking to friends and peers helped greatly. Bringing in Matt King (the editor) was a huge component of making the film a success. His commitment to narrative and story craft shines through the finished piece. It’s also been very interesting seeing the reactions to the film. How some people interpret the events versus how other people do. It’s become an odd sort of Rorschach test- which is not something you expect with a documentary.

AIFF – How can someone acquire art from Jay? The people he creates for are visibly moved.

Nickolas – Jay does some pretty incredible work. You can purchase his pieces or commission him here: https://www.jaykylepetersen.com/

AIFF – Did you receive a lot of support from the people of Tucson making this film?

Nickolas – Absolutely. The community here is one of the best things about shooting in Tucson. Most people are so warm and inviting and eager to help. There’s always a nice “go team!” vibe here.