AIFF caught up with talented filmmaker Xiong Wei in China to discuss the poignant WWII drama, The Dawning.

AIFF – What motivated you to tell this story? 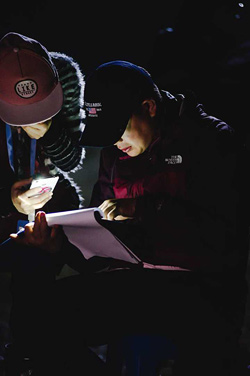 I met the character we used to design the film during an interview many years ago - Mr. Xia Jiajun, who was a war orphan and born in a remote and mountainous place in Hunan, China, but went to the city for education. Step by step, he became a great man for China. He is optimistic, confident and full of hope for life. His story and spirit inspired me to let his story to be heard. What's more, he is over 80 years old, but still always thinks that he can do more for the country and for the society. I think we should do something for this honorable old man who suffered in life. I want to help him to achieve a dream. He told me before that he has a golden childhood but doesn't remember everything, so I want to help him fill these memories. In addition, my father was a veteran who made a great contribution in the Vietnamese War. Many men like my father sacrificed their youth and even lives. They had a very hard life, and soon they will leave us, so this movie is dedicated to them.

AIFF - What were some of the challenges working with a cast made up largely of children?
跟这么多儿童演员一起拍戏有遇到什么挑战吗？

It is bitter-and-sweet to make movies with so many children. It is hard to manage children in the studio because children love to play. We tried our best to make children understand about war and that era. So, we decided to let all the children actors collectively be trained for 20 days in advance, including the history of Changde's germ war, watching related war films, reading scripts together, analyzing characters, and a series of in-depth role life experiences to help them build confidence to act their roles. It is important to find good actors for the roles but also to help the actors find their souls through experiencing and discussing their characters is key. Most of time we had fun together because children always surprise me, they have natural talents to act like children, rather than performing.

AIFF – How did you prepare to shoot in this location, how did you work with your cinematographer?
你在这样的场景进行拍摄前，都做了哪些准备？跟摄影之间是如何配合工作的？

In fact, we did shoot some war scenes, but we decided to cut the war scene out during editing because I don't want to use camera to show too much cruelty about war, mainly due to the fact that many children will watch this movie. The first audience of this film is likely to be teenagers. We do not want to cause too much fear and bad psychological influence on them. Therefore, my cinematographers used a long-lens to make the picture as calm and beautiful as possible, which to some extent has a huge contrast to the cruelty of war. When seeing children playing the harmonica by the river, making pumpkin cakes together, embracing the beautiful autumn harvest, but it is a nightmare ending, the audience surely would be touched.

AFF – Is today's generation of Chinese aware of what happened during this period?
当代的中国人知道那个时期发生的这些故事吗？

Most people know about the Anti-Japanese War, but when it comes to the bacteria war, not many people know about it. More people don't even know the fact that the Bacteria War has taken thousands of Chinese people's lives. In fact, the victims of the Bacteria War have never given up the lawsuit against Japan and fight for justice. Now, only 18 of the survivors of the Changde Bacteria War are still alive. The Dawning is also my reflection of war. I hope that when children see this movie, they will not be affected too much, but accept and understand that history. We can put down the hatred and things that can't make us move towards a better future. But always remember the history because we learn from history. This is what a person, a nation, and a country should remember and learn from and move forward towards a better future.

AIFF – Did you face any hurdles to get this film made?
（你在影片的制作过程中有遇到什么困难吗？）

Films based on truth have always been my favorite but shooting such movies always has a lot challenges because we have to make the story dramatic, but also ensure that the truth is not twisted and details must be shown. Therefore, the film's creation has been corrected by different experts and some exaggerated parts have been deleted. But rather than saying that this is an obstacle, I prefer to say that this is a basic requirement for a filmmaker. Here, I would also like to thank to the Association of Victims of the Bacteria War against Japanese Invaders. They gave me a lot historical materials for the film. The survivors of the Bacteria War told the story again and again, which also give me motivation for creation.

AIFF - Can cinema heal the wounds of the past?
你觉得电影能够修复过去的创伤吗？

Movies can't heal the wound, but movies can help people not make the same mistakes and get injured again. History is a mirror that helps us to see the rise and fall. If a nation does not think about its own history and does not learn from the sufferings of its predecessors, it will not have a future. Film is a good way to learn about history. The director can refine his understanding of history through the film, let the history be heard. I hope that after watching this type of movie, the audience will feel something and have some changes. It would be a successful movie if it can have an influence on one thousand audience members out of ten thousand.