We are excited to have gifted writer/director Eddie Mensore take us behind the scenes of the extraordinary film, Mine 9. The film opened theatrically in West Virginia on 23 screens and was number 1 at the box-office on 11 screens. 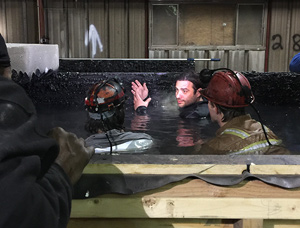 AIFF —  I read you had been trying to make this project for nearly 10 years, what kept you going to ultimately see it through?

Eddie — I have been in various production deals with Mine 9, and even had a large sum of money offered outside of those deals. However, in the long run, I would have lost control of the movie and would not have made the movie Mine 9 needed to be.

There would have been more bankable actors on screen, but the final product would have fallen to pieces. For good or bad, I wanted to make a movie I was proud of, and a movie that coal miners would be proud of.

Eddie — At first, it was quite fun. I love to get a good idea and start turning out pages. I finished the first draft in a month. Then, I handed to our coal mine advisor, Dave Jones. He laughed and said that it was good, but not realistic.

I wanted it to be realistic, so we started over from scratch. Coal mining is highly technical. The persons that make up this industry are quite intelligent. The process was like learning a new language.

It took a while, but we took my creativity and Dave’s technical knowledge and finally finished a good script 6 months later.

AIFF —  How did you gain access to Buchanan County, Virginia Calico coal mine, and convince them it was an ideal location for a film?

Eddie — Coal mine access is not easy, nor should it be. It is a very serious occupation, and I fully understand why they don’t care for cameras on premises. It took convincing, but they let us because I gave them my word that this movie would not attempt to make coal or coal miners look bad. Calico Coal Mine is one of the last slope mines around that is a 4-feet seam. The ground to roof is only four-feet tall. I wanted a claustrophobic space, so this was one of a handful of locations that were even possible to use.

AIFF —  Did you have any mining experience going into the shoot?

Eddie — I did not have any experience before writing the screenplay. Once we got permission to film, to even be on mine property – You have to take a mine safety class.

AIFF —  The acting in the film is physical and very intimate, how did you prepare the actors to shoot in claustrophobic conditions.

Eddie — I made all of the actors take a trip with me to the Calico Coal Mine in Virginia.

They took the safety class, went underground and learned about the job with/from real coal miners. It was quite important for the actors to do this, and it really showed in their performances.

AIFF — Your cinematographer Matthew Boyd brought a very dramatic style in and out of the mine, how did you both determine the look and feel of the film?

I am from West Virginia, so I always have a distinct visual of how I want my exteriors to look. It’s a reflection of my childhood. Regarding the dramatic look in and out of the mine – I certainly had a vision and Matt was onboard. However, Anaitte Vaccaro, the VFX producer/Supervisor/Lead Artist/EP – she was the main source of image and style.

Anaitte took the images we filmed, cleaned up countless mistakes within the frame, then seamlessly blended the footage from underground at the real coal mine with the footage we shot in the warehouse. Anaitte was incredible creating the overall image!

AIFF —  The production design was amazing, what was it like preparing the locations to shoot?

Eddie — We went to the Calico Coal Mine and filmed for 2 days. Anaitte Vaccaro, myself and Tim Barrett, production designer, watched the footage, then recreated the Calico Coal Mine in a warehouse in Atlanta. It took us off-and-on 11 months to complete the set. It was brutal. It took forever. I even turned down money and named actors, to build the set I wanted and put the visuals I wanted on screen.

AIFF —  The story is based on a lot of real events, how do miners feel about the film, any feedback from those who have seen the film?

Eddie — We release the film on 23 screens in Appalachia on April 12. We will see the coal mining industry feels about it. We made this movie with a great deal of respect for their job. Nobody has seen it yet, but it seems we will have solid opening weekend numbers in coal country. It seems they at least like the trailer. Hopefully, they feel the same about the movie.