To Hell and Gone

Tucson local producer/actor Carr Cavender along with writer/director Kyle Moore were kind enough to share insight into their epic western crime drama, To Hell and Gone. 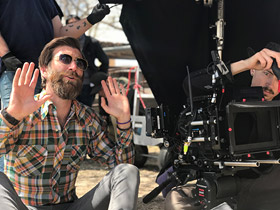 AIFF — Since you started with your locations, what was the writing process for the film like?

THAG — Having the locations for To Hell and Gone before writing it was nothing but a blessing. In fact, it was TOO MUCH of a blessing because there were so many other amazing locations, I had access to and didn't use. Deciding which ones to include was challenging. I was truly spoiled for choice. Beyond that, the locations guided everything. I took a few trips out to see them over the course of writing the first draft, and each subsequent trip was more useful and specific than the last. I took footage and photographs of everything I needed from every angle so I could consult it back home in Los Angeles. This allowed me to storyboard all camera setups as I wrote the script. This is in fact how I've made all of my previous work - locations first, storyboarding as I write

AIFF — What was it like casting the film, did you use local actors?

THAG — Casting To Hell and Gone was the first time I had worked with a professional casting director. We used all SAG actors, mainly from LA, although there were a few AZ local hires as well as some police officers in Safford. It was remarkable to have the opportunity to sit back and watch all day as actors came in and out, reciting words I had written. All of them brought it, 100%, and I felt very lucky to watch grown-ups making believe so earnestly in front of me. It made me think back to why I've always loved filmmaking and actors so much - because it's one of the only times we really let ourselves pretend and be children again

AIFF — Was it challenging working with gun shots, small aircraft and horses?

THAG — Working with guns and horses definitely made this more challenging than if we had not done those things, but I justify my filmmaking with setting challenges for myself. Since I was a teenager, I've wanted to make movies that always "go for it". By that I mean big ideas, ambitious set pieces, changing locations.... all elements of genre films and stories, which I have always gravitated towards. Nothing against purely dramatic, purely "talking" movies - in fact I'd love to become a good enough writer someday to NOT have to lean on guns and horses and genre elements - but as far as To Hell and Gone goes I knew I wanted to make a genre flick. I knew that meant additional logistical challenges, but our cast and crew handled everything like pros, the horses cooperated because of our fabulous animal handler Dave Hall, and the plane was expertly piloted by producer Carr Cavender's father Mickey. We were very lucky to have access to the plane whenever we needed it, and to have such a skilled pilot in the family. So yes, there were challenges, but I feel like we were very fortunate with a few key crew members and an adaptable cast.

AIFF — The score of the film is reminiscent of old western films, was that something you were thinking about when you wrote the script, or a part of your reverse producing?

THAG — The idea for the music didn't come to me until I was editing together the first reel of location footage after my first trip to Klondyke. I just heavily leaned into the Ennio Morricone vibe as temp music. After hearing all of his wonderful themes so many times while reviewing the location footage, it sort of shaped the protagonist: what if our hero also had no name, just like Clint Eastwood's character? What if our hero just drifted in and out of the movie, no back-story at all? These thoughts led me back to review some Sergio Leone films and I realized To Hell and Gone should kind of play like a new age spaghetti western. Composer Sean Carney worked with the musical direction "Ennio Morricone meets Breaking Bad", and I think he did a great job of using that instrument palette but modernizing it a bit, and not having it be cartoonish or distracting.