AIFF is honored to have Actor, Director, Producer Kast Hasa come to Tucson from his home in Albania to share his thoughts and insights on his compelling drama, Internment, an award-winning film that revolves around harsh communist rule in Albania during the 1980’s. 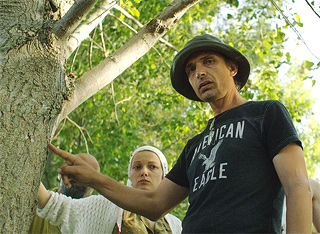 AIFF – Congratulations on your film, welcome to Tucson. How did you create the story around the Kulla family, was this inspired by a real family?

Kast – Yes, the story of Internment was inspired by three true events that happened during the 80’s. One was that of the Kulla family, the other was that of the youngsters in love (Artur and Frida) and then the story of the repatriated Albanian man returning from the USA. To make these three stories work together as one, I had to research about the period and the places where they actually happened. I grew up during communism and lived only 10 kilometers away from these Internment villages, utterly oblivious of their existence. People did not talk about them and I never had the chance to go to these villages as travelling from one to another was difficult. So, before writing the script, I went to the actual Internment locations and interviewed families and individuals that lived in the area during the 80s. My main goal was to be as accurate as I could in the storytelling, because I saw Internment not only as a fiction film but also, as a film that could show some history and shed some light on that period.

AIFF – Was it difficult to act in the film while directing and managing a film crew?

Kast – Very difficult. As an actor you only have to think about the character you are playing. You become that character and let yourself free once you hear the director say: “Action”, until you hear him again say: “Cut”. In my case, being the director and the producer at the same time, it was quite difficult because, while I was acting, at the same time, I had to be the one calling: “Action” and “Cut” as well. I had to be the character and still keep one eye on the shooting process. On the positive side, being the director, I had full control of the shooting process. I had the privilege of making as many takes as I wanted until I was happy with my performance.

AIFF – The actors in the film gave really good performances, how did you cast the film, and what were you looking for in the actors?

Kast – Being an actor myself and especially being the script writer of the film too, I had no difficulties recognizing the talents that could fit well into the character’s shoes. I held auditions all over Albania and only stopped when I was happy with my selection. First and foremost, what I was looking for were talented actors that could be able to become the character. I asked from the actors to portray characters as realistically to the period of the movie as possible.

AIFF – The film depicts anti-western themes; however, you contrast that by showing one of the soldiers wearing western designer clothes. Was that common among the communist régime of Albania?

Kast – This is an interesting question. This topic, of wanting things of the western world, in a country where people were forced through propaganda and sometimes threats to oppose, fear and hate of the West is simultaneously funny and sad. It’s funny how some people really feared and hated the western civilization, especially the United States, knowing its capitalism to be the main threat to the communism; some people pretended in showing this attitude in their behavior, however all of them, deep down recognized that those countries were way ahead of Albania, and their people were having far better lives then the people in our country. The privileged ones that could travel outside the country could see this; however, they were silent because it was dangerous to share what they had seen. Most people however, were able to tell the difference between Albania and the West, by secretly watching foreign television, Italian TV station for example. Also, the quality and style of anything that was able to make it to Albania from overseas, in private ways, was far better than anything we had seen produced in the country. In the movie, we see the cop wearing the Calvin Klein underwear stolen from the suitcase of the man returning from America. Of course, the cop was not allowed to wear them, but he liked the design, the comfort and especially that they had a cool name on them. Wearing foreign clothes or having anything from overseas was such a precious thing to do; it was something to be admired even envied and coveted. At the same time, it was very dangerous as the person wearing or having something from the West could be arrested and imprisoned at any time, under the accusation of spreading foreign propaganda.

AIFF – What were some of the difficulties getting this film made?

Kast – The budget. As it is with all independent films, our budget was extremely low. I thank the Albanian Center of Cinematography for supporting us with $75,000, however, that was all the financing we got. As a producer I had to negotiate the rates with the actors, staff, locations, lodging etc. I had to ask favors. A lot of them. We shot in real locations and lucky for me, those locations were near the city where I grew up. So I had a lot of help from local people who knew me as a kid.

AIFF – What have been the reactions of Albanians to this film, as you said no one wanted to talk about it before, is that still the case?

Kast – This is a great question for a delicate situation. Albania is not under communism anymore, but its effect is still there. You can see it every day in the way people live their lives and the way they treat their government. As far as Internment, people liked the film and now they are free to talk against communism, but that’s all, they can only talk. Nothing concrete has been done to get those responsible for the crimes during the 45 years of harsh communist dictatorship before justice. Why? Because they are still in power.

AIFF – How has the 28th annual Arizona Film Festival been for you, have you enjoyed Tucson?

Kast – The Arizona International Film Festival has been an experience I will never forget. The festival was organized very well. The selection of films was great and everyone from the staff was friendly and welcoming to the filmmakers. Everything was planned to the smallest details, on schedule and as promised. I attended the festival with my family and we were there for 10 days. We saw some wonderful movies and also we visited a bunch of places. It was our first time in Tucson. The city was beautiful and its people were nice. We loved everything!