In Times of Rain

AIFF is very fortunate to have the immensely talented director, Itandehui Jansen, take us on a cinematic journey of family and healing with her epic film, Tiempo de Lluvia (In Times of Rain). 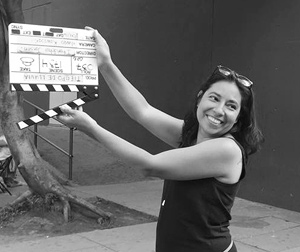 AIFF – This is a very intimate portrait of life in a picturesque village in Mexico, how did you come across this story?

Itandehui – The story is connected to the writer’s childhood experiences. Armando left his indigenous village to go to school in Mexico City when he was 11 years old and could not return to his village for several years. In Times of Rain wanted to portray the strong connection to culture and land of those early childhood years before leaving to Mexico City.

AIFF – How challenging is it to shoot in remote locations?

Itandehui – This was quite a challenging shoot. Both the producer and writer Armando Bautista and myself knew the region well, but there were several conflicts in the region at the time which made the production quite tense and stressful. Also, the region has limited access to health care so we were worried about nobody getting ill. In the end we had no real issues during filming and most of the shoot went smoothly. However it is quite clear that local communities have very limited access to infra-structure, health care, education and live in marginalized conditions.

AIFF – All of the actors in the village scenes were excellent. Were they from that area of Mexico where you shot the film?

Itandehui – Most of the actors had some connection to the region where the story is set. Ángeles Cruz, the actress playing Soledad, the main character grew up in the Mixtec region and speaks Mixtec. Alejandra Herrera (Adela) has family in the region, and also the grandparents of Nu Kahnu (the boy) are from the Mixtec region.

AIFF – Does In Times of Rain represent the spirituality that’s so prevalent in the film?

Itandehui – We felt the rain is an adequate metaphor for the different life changes the characters experience. Also the Mixtec people call themselves “People of the Rain.” In general we saw water as an important metaphor for healing.

AIFF – How did you work with cinematographer Iwao Kawasaki to create the look of the film?

Itandehui – It was a real joy to work with Iwao Kawasaki and his cinematography is absolutely beautiful. Iwao and myself discussed the script extensively and exchanged references of paintings, photographs and films we liked or thought of. As this was a micro-budget film we wanted to work with a documentary approach, using much natural light. In the end the location is extremely important for the look and feel of the film and we spend much time carefully deciding on locations, framing and composition.

AIFF – Can you talk about the support from people around the world who made this film possible?

Itandehui – We had wonderful producers and a very supportive cast and crew without whom the film would not have been possible. The film has an international team, with Dutch, Mexican and Swiss producers and co-producers. Also the crew is international, as the film was shot in Mexico, but post-produced in the U.K.