AIFF is excited to have multi-talented writer director and all-around creative genius Genevieve Anderson, with her intimate portrait, illustrating the human struggles between a military veteran and a young migrant desperately trying to connect with her family in, DUSTWUN 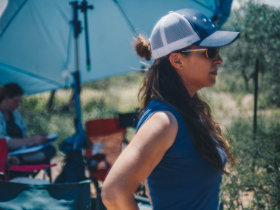 AIFF – Why was it important for you to tell this particular story?

Genevieve - I was introduced to the exquisite complexity of Mexican culture in my mid-twenties when I toured central Mexico with a theater company, then studied at the Estudio Busqueda de Pantomima in Guanajuato in the late 90’s. I have a deep affinity for the indigenous cultures in particular and the impact Western hegemony has had on them. When I moved to Tubac in the summer of 2015, I was taken by the community's proximity to the many migrants crossing the desert daily. I have a brother in Border Patrol who told me many, many stories of encounters with migrants as well as the problems with drug trafficking. Many people who need to get to family or find work are used to smuggle, and are often abused and taken advantage of by their coyotes. I encountered a migrant from Central America while on a rescue drive with the Samaritans who had sold his house to cross for the fourth time. He had family he needed to get to in the states and had literally sold everything he had, only to be taken advantage of by his coyote, and was lost and without food and water. When I asked him how he knew to approach us, that we would be sympathetic, he said, Pide a Dios - I asked God. I had read other stories of women crossing with nothing more than a few possessions and a medallion of Guadeloupe. This level of faith astonished me, as well as the determination to do whatever was necessary be with their families and to provide for them. A most basic human need so many risk their lives for - how could our response be anything but compassion? Granted there are problems that have to be dealt with - property being destroyed, government resources being usurped by the ongoing crisis of too many people crossing, the drug crisis, etc. - but we tend to lump it all together instead of understanding the complex issues at play. At the very heart of it all is basic humanity. I made DUSTWUN as simply as possible to show that humanity between seemingly disparate characters is possible.

AIFF – How did you get your actors prepared for such emotional and demanding roles?

Genevieve - The actors did their own research and came to the roles with their own ideas of who these characters are. Kenny is the only one based on a real character - a young man I worked with many years ago at the Los Angeles Mental Health Association. I saved the tapes of our interviews and used them as the basis of Kenny’s dialogue. I love his language for its innocence and its rawness - like many people struggling with mental illness they see forces at play in the natural world that we, in our rational intellects, are numb to. Although it isn’t fully developed in the film, Kenny is in many ways the key to breaking through how we rationalize violence against the other. Like the wall he built in the film, all walls meant to separate us from one another are false. Shane Dean is a very intuitive actor and also someone who struggles with mental health, so it was an interesting and challenging journey. This was Crystal Hernandez’s first role in a feature film and she knocks it out of the park. She’s a natural. Andy Martinez and Jill Remez are both working actors in LA, and they each brought such deep intuition and professionalism to the roles of Clark and Esposito. I feel like I did very little. I think the four of them were a great ensemble.

AIFF – What were some challenges shooting in the Arizona desert, your locations are very remote and isolated?

Genevieve - The biggest challenge was shooting in monsoon season, which I did deliberately. The desert is as much a character as the actors, and it was important to me that the dynamic and dangerous environment migrants have to cross in was captured in the film. The property is a very special spot in Green Valley called Tinaja, owned by my friend and art director on the film, Shay Lopez, and his family. It’s about 40 acres and is an active crossing site. We used many actual artifacts left by migrants crossing through in the film. The wall was built from existing materials left over from 40 years of the Lopez family’s landscaping business. The story, which was in its very beginning stages when Shay invited me to the property, came into full focus in this location. We put the entire thing together in about three months, and shot in 10 days. It’s a very magical spot. I have several stories of rattlesnakes, flooded sets, lightning strikes, meltdowns, and other crazy challenges I can't elaborate on in a short interview, but would love to share in a longer format one day.

AIFF – What influenced your decision to show the parallels of PTSD between migrants and military veterans?

Genevieve - The critical parallel is that both the migrant and the veteran are DUSTWUN - Dusty, Status, Whereabouts Unknown. It was compelling to me that a patriot and an undocumented migrant (wrongly titled “illegal alien” in news media) occupy the same designation. Both are lost and exiled, and both are human. It’s as if the desert cancels everything about them except for their shared humanity. Kenny’s insanity is a representation of the insanity of wall-building, and the insanity of convincing a nation of people that the wall was necessary to stop the throngs on peaceful asylum seekers heading to the border out of necessity. Much of the film is representational - in many ways it’s more like a play than a film - as with my puppet films, I endeavor to bracket reality in a way that agitates how we normally see things. The acronym also applies to the state of our country’s moral center on human rights. The way the past administration dealt with immigrants and asylum seekers was shameful, and we’ll be dealing with the consequences of that inhumanity for many, many years to come, in my opinion.

AIFF – Any plans to return to Arizona for future artistic projects?

Genevieve - DUSTWUN is a rough draft of a series I would like to create diving deeper into the issues of immigration, the border security industry, the treatment of veterans, PTSD and mental illness, as well as the Native American history and the supernatural aspects of the region. There are time/space portals in Southern Arizona and vortices and all manner of fascinating story devices that will provide an amazing prism for these dense, highly topical themes. Southern AZ is an incredible place to film with a committed and skilled talent base. I intend to help bring more projects here.