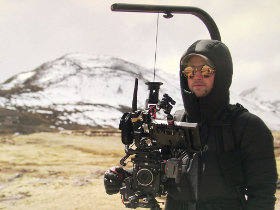 AIFF - Before shooting the film, and your discussion with the director, what style and color pallet did you think were important to bringing, She’s in Portland to the screen?

Devin - The director and I spent a lot of time driving up the coast scouting the actual trip in the film. We let the natural landscape provide the color pallet which consisted of ocean blues, earthy tans and browns and greens of the California redwoods. Stylistically we wanted the film to feel authentic so we went mostly handheld for the trip itself and when the characters were more grounded at home or when they finish their journey we tended to shoot more on tripod and steadicam.

AIFF - How hard was it to get those terrific aerial shots during a road film shoot, is Kiel Whetstone someone you often work with to manage technically difficult shots?

Devin - Why Yes, Kiel Whetstone is my brother. He and I had an aerial company at the time of the film and worked together on many projects. He's a terrific pilot but sadly no longer flies. It actually was quite difficult getting those shots. Mostly because it's very challenging finding places where you can pull over without people and launch a large UAV safely.

Our copter for this shoot weighed in at around 35 lbs. and had about a 5-foot wingspan so it's incredibly dangerous (and illegal) to fly over people. The other big challenge was attempting to film in Big Sur. When we shot this, half of the road had been washed out by a landslide which posed obvious transportation issues. The general landscape and windiness of the terrain and Highway One also provided further challenges because cell reception was poor and walkie talkies only travel so far if you don't have line of sight.

Sometimes when we'd send the Bronco down the road to set up for the shot we couldn't reach the driver to let them know we were rolling and so we had to use mirrors to bounce the sun back towards the bronco with a series of morse code to communicate.

AIFF - How do you keep the cinematography in balance with the characters so that we stay focused on the characters, and not transfixed on the beauty of the scenery?

Devin - It was really difficult. The scenery always tried to upstage the actors but we decided early on to make the landscape one of the characters in the film so the fact that you asked that question makes me believe we did our job. I also used shallow focus when the actors were talking so the landscape would go just soft enough to provide the beautiful textures and colors while drawing your eye back to the actor's performances.

AIFF - This film is location heavy were you concerned about being able to get all the shots?

Devin - I was ALWAYS concerned about getting all the shots ha-ha. It's incredibly difficult to make a movie and also take the entire crew for a road trip simultaneously. There's no turning around and going back. You only have the time that you've scheduled so if you're behind you never get that time back or the shots that you missed. Especially if it involved the actors.

On a normal feature film schedule you spend the entire time filming. For a road trip film, we spent half the time driving so there was always a scramble. We had quite a few 16 to 18 hour days. I remember one night we filmed until the sun came up then slept for about 4 hours and started filming again and then drove to the next destination. It was brutal on the crew and I'm very glad we didn't have any accidents. This is my third road trip film and I don't think I can do any more ha-ha.

AIFF - What camera and lens did you find most effective in capturing the essence of the characters, with modern technology, is color correction less of an issue.

Devin - I shot the film on the Arri Alexa Mini which has great dynamic range which allows us to capture all the bright spots of the landscape bathed in sun as well as the detail in the shadows. Arri has been making cameras for over 100 years so they are by far the best cinema camera. I shot this film on anamorphic lenses which captures a 2.40 : 1 wide aspect ratio. That allowed us to really capture the surrounding landscape in the same frame with the actors and give power and justice to the expansive panoramic views. Without those lenses we wouldn't have been able to bring the same immersive feeling to the audience because it let us squeeze more of our surroundings into the frame.

Modern digital cinema cameras like the Alexa allow you to push the exposure and the color grade further than you could with film allowing more creativity in the color correction process. We didn't do much in the color grade. We wanted to let the natural colors of the landscape stay true so other than a bit of balancing one shot to the next, the correction was shot mostly the way it was captured in camera.

I just want to thank the Arizona International Film Festival for supporting our film. We are very grateful to have been selected for this festival and to appear alongside all of the other great films.

Lastly, I need to give a many thanks to the cast and crew for putting so much hard work and heart into this project and Marc Carlini, the director, for giving me the freedom to shoot the film the way that I wanted to and for trusting me with a project so dear to his heart. Thank you everyone!