AIFF is honored to welcome, brilliant local Tucson filmmaker, Juliana Piccillo with her gripping and unflinching look into the treatment of sex workers in global cinema, with her film Whores on Film. 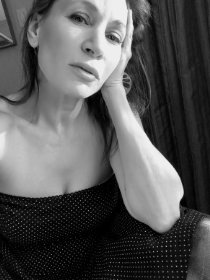 AIFF - What led you into becoming a filmmaker, are you interested in exploring other aspects of sex workers on film?

Juliana - I became a filmmaker because I've always felt like an outsider and movies showed me a place where I might fit in. I think film can serve a few purposes: entertainment/escape, to reinforce cultural norms and/or to give insights into our own experiences and identities. I was always obsessed with films that told me about myself and what was possible.

I became a sex worker as a teenager, when I was still in high school, barely 17. Bergman's Scenes from a Marriage somehow came on my radar. I went to an arthouse in the city alone and walked out in love with the power of film. Later, I saw Pretty Baby by Louis Malle. It told me that I could dispense with any shame I had about being an underage sex worker and that my love for my brothel and my coworkers was normal and good. As a little kid, I watched all of these singing and dancing hooker films - Sweet Charity, Gypsy, Irma La Douce, etc which planted a seed - women didn't have to be married - there was an escape hatch. I think that stayed with me and is a big part of why I looked at taking a job in a massage parlor as a great adventure, rather than a great tragedy.

I was pursuing a career as a journalist in college. I interned at the Boston Globe and later got a job stringing for the Associated Press, covering mostly a crime beat. I started writing film reviews at the college paper and afterwards for a chain of papers. That led to wanting to make my own films. I realized in some years later that I could use film to perhaps open up a conversation about sex work. My agenda was very much as an activist rather than an artist. I gave up making narratives and focused on documentary.

I still have tons I want to explore. Parenting is one area that's still incredibly taboo. If a sex worker character has a child in a film or tv show, usually she's not raising that child - but in real life many sex workers are parents, and incredible parents, so I really want to show that.

AIFF - When you started down the road to create Whores on Film, was it difficult to have people open up about their experiences as sex workers? The people in the film are very honest and candid it is very original work.

Juliana - It wasn't difficult to find folks to be in this film because I'd been a sex worker rights activist and a sex worker on and off for a very long time, and I knew a lot of folks. What was hard was representing all of the folks I wanted to represent, because there are fewer substantial representations of POC and trans people in film. So not everyone sees themselves on the screen with any regularity. It's a given for many marginalized people that they aren't included or if they are included, it's likely to be terrible, and so their relationship to the medium is very different.

The folks who were in this documentary are brilliant and were so generous and honest. I think they are very representative of the sex working community. When you do something with this much stigma, it forces you to deeply interrogate your own assumptions as well as social mores. That makes for some really smart and actualized humans.

AIFF - Has the misrepresentation of sex workers on film been so ingrained in our minds by cinema historically, that overall change seems unlikely from a Hollywood perspective?

Juliana - There's a very long way to go to undo filmic stereotyping of sex workers and most of what's produced by the mainstream is persistently problematic but there have been changes and these changes are directly related to the activism of sex workers themselves. Filmmakers are hiring sex workers as consultants in an effort to be not only accurate in the cosmetic sense - clothes, language, etc, but also to attempt to not offend or inflict harm to the sex working community. They don't necessarily succeed, but it's a start. There's a new documentary in the making, that's extremely problematic, and pressure from sex workers caused one producer, Laverne Cox, to drop out of the project. There's a series on Netflix, Bonding, that started out very inaccurate and offensive, but the writers listened to criticism from sex workers and made positive changes. So, change is happening but we need to keep applying pressure. Hustlers and The Deuce, both consulted sex workers and still ended up rather flawed, so it's two steps forward, one step back.

AIFF - Some of the modern cinema clips in the film are excessively violent, does it still carry the same impact on viewers as it did in the 1970’s. Do filmmakers feel obligated to overly punish the sex worker on film or are they simply catering to the tastes of new audiences?

Juliana - Violence towards sex workers in film is a direct result of the Motion Picture Code, which banned sex workers from the screen for two decades. When filmmakers first started testing the boundaries of the code, they found that if the sex worker was punished, killed, beaten or ruined somehow - the censors were more lenient. This became a convention for filmmakers and an expectation for audiences, and very much fits into film's role as a reinforcer of cultural norms. Stepping outside of gender expectations, being a bad woman, would result in punishment, so you'd better follow the rules. Audiences are inured to this violence and anticipate it. And because people indulge their sadistic side a bit while watching movies, it's far easier to accept violence against a category of people you see as less than fully human. Only a sex worker character, who repents and renounces her former life has a shot at a happy ending.

AIFF - How was the journey into your research, were you often surprised by what you discovered in early cinema?

Juliana - Early cinema, especially pre-code, was incredible in its treatment of sex workers. Firstly, there were a ton of films about them. Many women were moonlighting in prostitution to make ends meet around the turn of the century so they were very popular characters. And, attitudes weren't nearly as negative as they are now. In some cases, the sex worker was seen as a libertine, living a good life, finally free of the strictures of a more conventional existence, but at minimum she was sympathetic. What's most striking is the parallel between the white slavery panic of the early twentieth century and the current sex trafficking panic - both of which were/are enormously over blown hysterias that produced hundreds of films, and also had/have real world consequences in terms of legislation criminalizing prostitution and increased stigma on sex workers.