Rob Burson: Hell of a Heartache

AIFF is proud to have writer, director and accomplished musician, Rob Burson join us for an in-depth look at his heartfelt dramatic film, Hell of a Heartache that explores the very relatable struggles of life, love, and family. 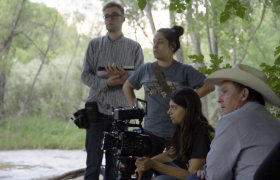 AIFF – The film was shot in and near Clarkdale Arizona, what influenced your decision to shoot there? It appears as though the community really came together during production.

Rob – Location and budget guided the script. I've lived in the Verde Valley for 25 years, so I know a lot of people, and haven't burned too many bridges along the way. In my spare time I would visit locations that had the look I was aiming for, then write the script around that location. Matt Taylor came in around this time to help with the script. He'd help with a scene and really make it great, but not having seen the location, might add something like a jukebox to the action. I'd have to pull the jukebox part out of the script, even if a brilliant part of the script, because the location didn't have a jukebox. Once we got those kinds of things cleaned up, I'd then approach the location owner. "Hey, we're going to be shooting a movie in Clarkdale, can we shoot a scene here?" 90% didn't blink an eye and said yes. On top of that, they would often go out of their way to accommodate us when on location, and sometimes we'd grab them to be an extra or even act a small part. The community was hugely supportive.

AIFF – Where did you find Genesis Van Parys, who plays Sophie Aberdeen, she gives a really strong performance, how was it acting with her and directing her to find the right chemistry that fit the of the tone film?

Rob – She was great! I have been in several short films with Genesis' mom, Erica Van Parys, who plays Sophie's mom in the film. I wanted an actual mom and daughter team. Casting both was kind of last minute, because the original mom and daughter team moved from the area. I knew Erica could act, but we never really auditioned Genesis. I think we did one quick reading so we really took a big chance, and cast Genesis without an audition. On the first day of shooting, everyone was collecting holding their breaths, as we didn't know if she could act, would know her lines, etc. After the first take there was an immense sigh of relief from everyone when she nailed the first scene with me.

Everyone fell in love with Genesis on the set. She's very sweet, super smart, and was a real trooper on some very long days. She and I grew pretty close, and there was definitely a daughter / dad connection by the end of filming. Her mom, Erica, was there throughout shooting, and while herself acting, also sort of served as Genesis' manager, mom, wardrobe and hair.

AIFF – Music is obviously a huge part of the film, when you created the score for the film, was it difficult to find the right tone in the quieter moments, such as the scene leading up to the laundromat, it was excellent.

Rob – Thank you! Brendan Rincon did the score. We talked about the general vibe we wanted, and artists we both mutually enjoyed. Jonny Greenwood came up, as did electronic artists like Jon Hopkins. I wanted something ambient, but also something that would inform the mood. I know there is a camp of film makers who think the music should not tell the audience how to feel, but for this film I wanted subtle guidance. I think Brendan nailed it.

Anyway, once we decided on the general musical feel, he was left almost completely to his own devices. I trusted him and handed over the reins. Aaron Carl Swensen, aka Dog of the Moon or Moondog, did Booby Thompson's original song Hillbilly Heartbreak. I had come up with a rough chorus, and played it for him. He took it from there and made it into a real song. We talked about the down and out themes of the song, but he wrote the lyrics.

We also discussed Hillbilly being a derogatory term. I wanted to keep it though, because I wanted Bobby Thompson to be out of touch in that way. It's subtle, but part of his growth is becoming more enlightened along the way. His past had to have stuff like this. Like calling women "darlin'", etc. My daughter contributed an electronic pop song for a scene also. She had a song that matched well with a dancing on a motel bed party scene.

AIFF – Would you say that your film has some autobiographical elements, it’s hard to watch someone go down a road of self-destruction. It’s clear that you have known some folks dealing with substance abuse problems. (Lord knows I have)

Rob – Oh yeah, for sure! I have two daughters. Their mother and I divorced when they were in high school. It was an unexpected divorce for me, and in the year following the divorce I really spiraled down. I won't go into details, but there's some overlap. Overall though, like you, I have known people dealing with substance abuse problems. Sometimes they are overcome. Depending on the damage done (burned bridges, mental health, physical health, etc), the person who comes out on the other side may be...imperfect. That's what I wanted to really honor though. Hollywood often shows people going through their trials and tribulations and coming out perfect on the other side. I wanted Bobby Thompson to still be pretty wobbly on the other side. To me, that's his final facial expression at the end. He's not beaming and smiling. He's worried.

AIFF – What was one of your more challenging days of shooting, although they all are, anything that’s sticks out as difficult or even something that inspired you on set?

Rob – In general, the biggest challenge was having a very small crew. There was no wardrobe person, or props, etc. Our most stacked days were five crew members, myself included (as Director). It was super indie. There just weren't enough hands on set. Katie Owens was the Assistant Director, and she really wore a lot of hats. She was doing much more than a typical Assistant Director. In fact, though everyone had specific crew spots, everybody pitched in where needed. Sometimes no extras would show up, and that was a pain.

Trying to shoot a crowded bar scene with...no crowd...changed camera angles, etc. Crowd sound design in post helped a little. We did the bulk of the shoot in two weeks. But we did a fair number of pickups months later. Continuity became a real issue. We did our best to work around it. But all in all, it was what I would describe as a fairly easy shoot. Again, the community didn't let us down on providing locations, friends and family pitched in with food and catering, and several people completely volunteered their time. All the actors and crew committed 100%. That was inspiring. Look, a tough day on set is better than a great day in a cubicle, right! Long live cinema.