Maverick Moore: My Dinner with Werner

AIFF is extremely grateful to have, exceptionally talented writer/director, Maverick Moore share his thoughts on his hilarious film, My Dinner with Werner, about the legendary filmmaker Werner Herzog and his contentious and equally legendary actor, Klaus Kinski. 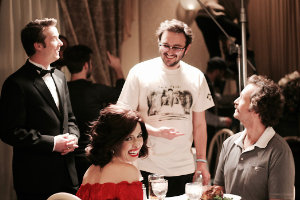 AIFF – What was the inspiration that led you to creating this film? It also plays exceptionally well as a dark comedy for viewers who may not know Werner Herzog and Klaus Kinski.

Maverick – Thank you! I really appreciate that compliment.

The inspiration to create My Dinner with Werner came from our fascination with Werner Herzog, Klaus Kinski, and their famously turbulent history together. For over 15 years, acclaimed German filmmaker Werner Herzog made movies with controversial German actor Klaus Kinski. Their work together was legendary. Their partnership was notorious. Their methods were dangerous. And their “friendship” was said to be borderline murderous. However, this aspect of their collaboration arguably contributed to the five movies they made together. But in 1987, they stopped working together - forever. There are lots of reasons why (as suggested above), but the exact, singular event that led to their separation (if there is one) is a mystery. So, I was inspired to tell the story of what "really" happened - the night it all went devilishly wrong. When Werner is on a blind date at a fancy restaurant.

Thoroughly researched in all things Herzog and Kinski, this story plays with history in an entertaining, loving, and radical way. And while the story is inspired by Herzog and Kinski and their volcanic working relationship, those characters in the film were always intended to be fictional adaptations that both exaggerated and honored them. However, our goal from the beginning was for the film to be a good time at the movies – whether or not you catch the references. We wanted it to be fun for everyone - both for folks familiar with Herzog and Kinski, and for folks that have no clue who they are. So, it was very important to us that the movie would be understandable to all audiences.

AIFF – How did you prepare actors Matthew Sanders, who plays Werner, and Andrew Perez, as Klaus, to play such dynamic personalities, and have Chynna Walker, who portrays Christine, play off their iconic personas?

Maverick – There’s a famous quote that’s been passed down and around so much that I don’t know where it actually came from, but it says that, “90% of directing is casting.” And I think that’s true. That said, the preparation really started with that - the casting process.

For the role of Werner, to see how actors could embody the real Herzog from the mid-to-late 1980s (which is when this story takes place), we first asked actors to send us a self-tape performing Werner Herzog’s monologue about the jungle and the harmony of the universe from Les Blank’s Burden of Dreams. After that, to see how well actors could adapt that portrayal to our fictional character, we then asked actors to send a self-tape performing a few scenes from the film as a callback. And, finally, we then arranged a chemistry test with the lead actress, Chynna Walker, and chatted with the actor about the character, the story, and the process. We were incredibly fortunate to cast Matthew Sanders (who coincidentally has also worked with some of Herzog’s peers; Volker Schlöndorff and Margarethe von Trotta).

In the middle of casting, I got a personal email from an actor named Andrew Perez regarding the role of Klaus. In his email, he told me outright that he had essentially already reincarnated Klaus Kinski – he studied him for over a decade and even wrote and starred in an award-winning play, The Second Coming of Klaus Kinski. The boldness of his email spoke to me, as did all of his impressive materials he sent with it. Needless to say, we got immeasurably lucky (and Andrew was not at all the diabolical persona Kinski was said to be - except when he needed to be, on-screen).

Chynna Walker starred in my previous short film, Shotgun, and we always intended to work together again. Knowing her style of comedy and her range as a performer, I knew she would elevate what we wanted to achieve with this character. So, we wrote the role of Christine for her and, in some cases, with her. Unlike Werner and Klaus, her character is an ambassador of the audience and not based on anyone, so we worked closely with Chynna to develop her character’s identity, personality, motives, and backstory in a way that made sense given her character’s twisty journey in the film.

From there, to find and fine-tune a balance between the personalities and develop an honest connection between the characters, we had a variety of rehearsals together before shooting. In the meantime, the actors also watched a handful of movies relating to their character and the intended tone and style of the film. The actors were excellent in every step – from casting through production and beyond. It was all-around awesome to collaborate with each of them, and I am endlessly thankful for their hard work, dedication, trust, talent, and friendship.

AIFF – What were some us the difficulties you faced getting the film made? Is it more difficult to find financing for short films?

Maverick – This film was a tough nut to crack, and making it was a seemingly never-ending process (I guess that’s what I deserve for making a movie based on Werner Herzog). There were more than a fair share of difficulties - finding actors that could embody Herzog and Kinski, finding a restaurant that could be more or less destroyed, and really just assembling all of the resources, finances, and talent needed to pull off all the fun, bizarre craziness that’s in the story. And there’s an evil talking chicken we had to find too, but that’s another story. I can’t complain though - I never had to lug a steamship over a mountain or anything.

There were certainly days when I thought I might have dreamed too big, but thanks to our cast and crew - their never-ending hard work, trust, and talent - we managed to pull it off and I was rewarded with a family and many new friends in the process. That made all of the difficulties and challenges worthwhile. Plus, like every film, it was an awesome learning experience.

AIFF – Do toxic relationships between director and actor create better films or create a more interesting mythology surrounding a film?

Maverick – Perhaps that dynamic creates an interesting mythology surrounding a film. But, personally, I try to instead foster the feeling of being in a supportive family amongst the cast and crew. The best collaborations that I have been a part of were never toxic – they were always founded on trust, respect, and kindness.

In the case of Herzog and Kinski’s supposedly stormy relationship, both of them have accused each other of fabricating and exaggerating those famous on-set stories about the other. So, who knows how factual the stories really are. Regardless, the stories have nonetheless created fascinating mythologies that surround the movies they made together.

AIFF – Do you think Werner would appreciate your amazing representation of his personality in your film or is that something you have to put out of your mind during the process? He did eat his shoe once, after all.

Maverick – Thank you for your kind words.

This entire film was born out of our love and appreciation of him, and I’m definitely a big Herzog fan, so I certainly hope so. However, based on my research, he doesn’t watch many movies. And I don’t wanna take away any of his time by watching mine – I just want him to keep doing his thing. That’s why he’s awesome.

Either way, audiences often finish this movie wanting to learn more about Werner Herzog, Klaus Kinski, their history, and the films they made. If anything, I hope that encourages people to watch the movies that each of them made – especially the ones they made together. And eventually, yes – Errol Morris’ film, Werner Herzog Eats His Shoe.