AIFF is very excited to have highly talented and emerging writer/director Em Johnson share her insight into creating Balloon Animal, set in the colorful, yet complex world of a traveling circus. 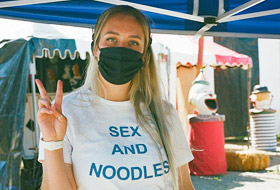 AIFF – Why did you choose the circus as the back drop for your film?

EM – It's funny actually. Katherine, my creative partner and also the lead actress in the film, approached me with solely a visual: A girl with blue hair who makes balloon animals. It was an odd visual, but compelling and unique. Unfortunately, I had no idea what to do with it, so I pushed it aside. After a few months though, the two of us reconnected and started hammering away at how we could make this visual a moving story. Since we were going with balloon animals, the idea of the circus backdrop wasn't too farfetched. I think the circus added a lot to the imagery and metaphor within the story so, to me, it's more than just the setting. It's a vehicle that pushes the main character into making her choices.

AIFF – Katherine Waddell gives a much nuanced performance as Poppy, how did you go about directing her, and is it important to have good chemistry between director and actor?

EM – Katherine and I had built the story together, so we grew very close over those two years and it was natural finding our chemistry as director and actor when it came time to put ourselves in those roles. Both of us look at the other like pieces of a whole when it comes to our work on set. There's no pride or hierarchy between us, which I think helps create a nice environment for collaboration. Since Katherine had gotten to know Poppy, the character, so well, she was quite natural and didn't require much direction on my end. However, when I did step in to offer notes or changes, she welcomed them and executed them flawlessly.

AIFF – You shot a lot of night scenes, why was that important to Poppy’s character and the film as a whole?

EM – Poppy goes through a major life change throughout the film. People can associate the darkness or nighttime with rebellion, secrets, fear, and risk. I think all of those elements, although subtle in Balloon Animal, fit well with how Poppy is feeling when she acts on her own accord. The nighttime gives Poppy the space to change and, while it can be scary, it's also welcomed and exciting. We needed to convince the audience that in a short period of time, Poppy could realistically choose to go down a different path in life. Thankfully, I think we achieved that.

AIFF – Are you seeing that women filmmakers are gaining more prominence in the film industry, or are we still a long way off?

EM – Oh, that's a tough one. While I would love to say that we have gained the prominence we deserve, I don't think I can. Yes, there are a lot more women in the industry. Yes, there are a lot more stories with women at the helm. It still isn't enough though. We made an effort in our production to have over 50% of the cast and crew women. We were successful in that. So I know there are women out there ready to work and gain experience and create. It's just opening up that space for women and actively working towards their inclusion. And it's important to remember that the phrase "women in film" applies to more than what is seen on the screen. Placing women behind the camera is of equal importance.

AIFF – Can you tell us your best day of filming, your worst day, and how your crew held up during the production?

EM – Well, the best day of filming had to be the first day for me. Everyone was so excited to be there and anxious to tell the story. We'd had to postpone twice due to COVID complications and being on set finally had been a long time coming. We had actually started bringing crew onto the project before COVID even began. And so, when we all stepped foot on set it was like a real "Wow, we made it..." moment. It was inspiring. On the other end, the worst day would've had to have been the night we shot the diner and the gas station. And I'm only saying that because it was freezing outside and it was an overnight. People were piling on multiple coats to stay warm while also trying to stay awake. While the shots were good and the production was running smoothly, it was hard to focus at times. Throughout the production, we rarely had any issues. Our production team had carefully taken the time to hire the person we thought best suited the role, while also connecting with us. We all enjoyed each other's presence and respected each other's time and attention. To this day, Katherine and I still get compliments on how our set was run and how collaborative our crew was. It's heart-warming to hear and gives me the power to continue building that high standard on set.

Megan Stacey, the cinematographer for Balloon Animal, was awarded the Panavision Award for Best Cinematography in a US Feature.