One Road to Quartzsite

AIFF is honored to welcome Ryan Maxey and his highly acclaim film, One Road to Quartzsite, welcoming us into the ordinary, yet extraordinary intimate community of folks living the dream near the California / Arizona border. 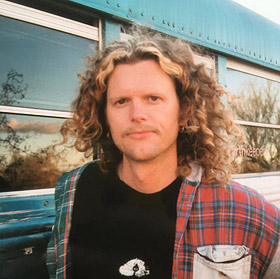 AIFF – How did you discover such a compelling story in a small area near the Arizona / California border?

Ryan – For the past decade, I've had a mid 90's short school bus that I often live out of. And when you spend enough time on the road, you end up passing through Quartzsite for one reason or another -- to get some cheap gas, or find a free place to camp for the night. The more I spent time there, the more I was compelled by Quartzsite culture. It is a place where I felt totally inspired, but at the same time was made to feel quite uncomfortable. I thought the whole place was a fascinating little representation of American culture -- our conflicts, Americana traditions, and strange contradictions that felt at times disturbing and other times hilarious.

AIFF – You let the story unfold by letting the people talk about their lives, was this the way you intended to shoot the film from the start as opposed to narration and interviews?

Ryan – I love documentaries that are more observational in form, stories that unfold in a more lyrical manner, rather than literal. I definitely set out to make a fully veritè documentary and got pretty close! I just couldn't resist the temptation to throw in a little exposition from our old 90's cowboy friend in the VHS film provided by my good friend, and long-time Quartzsite snowbird, Anker Rasmussen.

AIFF – The young kids, one of whom had a camera, captured some really beautiful moments, was this something you planned or it’s a happy accident?

Ryan – I brought a couple of camcorders out to the desert with me, and one of them I gave to the crew of kids to make their own movies. As a sort-of energy exchange with the kids, I taught them a bit about filming and editing. We'd go to the library and I'd show them how to edit films, and we'd make short flicks of their life out in the desert. Their footage was amazing. I particularly love Mazin's 'first hand' account of his left hand. Next step is to get them cinematography credits on IMDB and setting their career in motion!

AIFF – The meth/heroin pandemic is shattering the youth of the world, were you surprised to see a place young people could turn to in Quartzsite?

Ryan – Quartzsite has a little bit of everything, and a little bit of everyone. When you're going through something as difficult as addiction, I think it's crucial to find a supportive friend, or community to help you stay healthy. Quartzsite, certainly has some amazing folks who serve as mentors, and offer safe and respectful places for folks who are struggling -- the difficult thing is that Quartzsite is an ephemeral community, with a lot of people on the move. One moment you may have a support system, and another moment you may be left starting from scratch, looking for a new community.

AIFF – Any plans to return and see how the folks in Quartzsite are holding up, you must have become very close to some of the residents.

Ryan – I'm very close with my Quartzsite family! I continue to visit for extended periods -- hanging with my pals out there, and supporting some of my friends and collaborators that are going through rough times. Earlier this year I hosted a sneak preview of the film out in the desert. We set up a big screen over my bus, lit a bunch of bonfires, and found a small piece of carpet that we spray painted red. All my friends and folks in the film got to have their glorious red carpet moment. We watched the film and partied all night. One of the best nights of my life! You can see some of the pics on our Instagram page, @quartzsitefilm!

One Road to Quartzsite was named Best Verité Documentary at the 2022 Arizona International Film Festival.